THE PORTER is set in the early 1920s and inspired by real events, starring Aml Ameen, Ronnie Rowe Jr., Mouna Traoré, Loren Lott, Olunike Adeliyi, Alfre Woodard. The show follows train porters Junior Massey (Ameen) and Zeke Garrett  (Rowe Jr) and their friends and families as a tragedy on the job sets them on starkly different paths to better lives – and on a direct collision course with each other.

Set in the early 1920s and inspired by real events, THE PORTER follows train porters Junior Massey and Zeke Garrett and their friends and families as a tragedy on the job sets them on starkly different paths to better lives. While Junior takes advantage of a broken system to pursue money and power in gambling and bootlegging, Zeke fights the railway to change the system from within by unionizing the Black porters. As it becomes clear that Junior and Zeke’s goals are in direct conflict with each other; their once unbreakable bond is stretched to its limits. Can a friendship forged in the trenches of war survive this new fight for freedom? Or will they have to betray each other and their community to make their dreams reality? 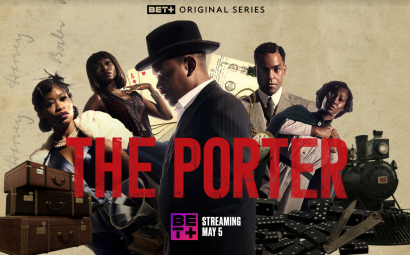 BET+, a joint venture between BET and Tyler Perry Studios, is the leading streaming service for the Black community. With thousands of hours of hit movies, TV shows, stand-up specials, stage plays and more, BET+ offers the best of Black culture, including exclusive originals from best-in-class creators like Tracy Oliver’s First Wives Club, Tyler Perry’s Ruthless and Bruh, Carl Weber’s The Family Business and Will Packer’s Bigger, to name a few. BET+ members can watch as much as they want anytime, anywhere, on any internet-connected screen and always commercial-free. Visit BET.Plus to learn more and follow @BETPlus for the latest news and updates.

About Sienna Films Sienna Films is one of Canada’s preeminent scripted content companies, producing film and television internationally since 1992. Credits include four seasons of the award-winning series Cardinal (Bell Media/ Hulu/ BBC2/ BBC4/ Canal+) starring Billy Campbell and Karine Vanasse; three seasons of Ransom (Corus/CBS/eOne), and the CBC series Trickster, which premiered to critical acclaim at MIP and TIFF before being sold and broadcast internationally on Sky UK and CW and Sundance in the US. In release is the 8-episode first season of comedy-drama Sort Of for CBC and HBO Max, which premiered at SeriesMania and TIFF. Other productions include 13-episode series Combat Hospital starring Elias Koteas and Michelle Borth; mini-series Diamonds starring Derek Jacobi, Judy Davis and James Purefoy; and feature films including How She Move (Paramount), Touch of Pink (Sony Classics) and New Waterford Girl (eOne). In March 2020, the company was acquired by Sphere Media, which specializes in the creation, adaptation, production and distribution of television and film. Sphere’s credits include the Emmy Award-winning 19-2 (Bell Media) and Transplant (Bell Media/NBC).