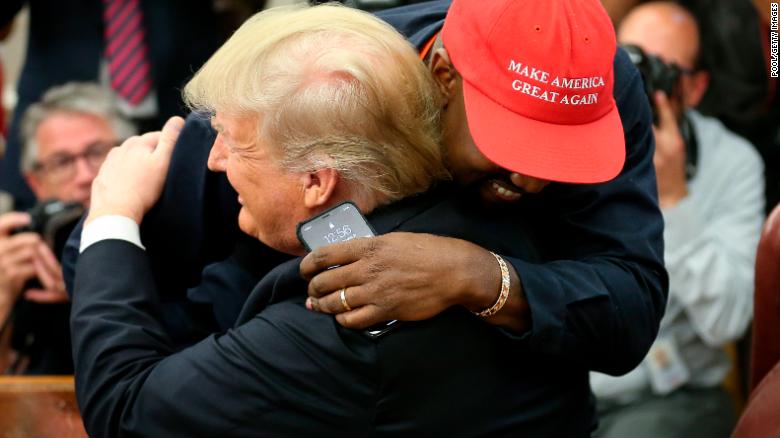 In 2016, I declared that I was done with Kanye West. I stood in a parking garage outside of Lenox Mall waiting to get into the Saint Pablo pop up and I wondered, is being a Kanye fan worth this? A few days later, I stood in awe as my favorite performer floated on a stage above my had. My friend and I had floor “seats” to see Kanye West in Atlanta- a scratch off of my bucket list.

Today, Kanye met with Donald Trump at the White House to discuss prison reform and urban revitalization. They talked about neither. He did find time to speak on a misdiagnosis (one day after #WorldMentalHealthDay), the Super Bowl and a hydrogen-powered plane.

And apparently so is everyone else. Rapper TI has (finally) decided to wash his hands of Kanye.

Here’s his entire rant, transcribed. Decide for yourself how you feel.

Here we have Larry Hoover’s lawyer with us today and it’s a prisoner that we’re focused on. He has six life sentences and they have him next to the unibomber doing 23 and 1 … Really the reason why they imprisoned [Larry Hoover] is because he started doing positive for the community. He started showing that he actually had power, he wasn’t just one of a monolithic voice but he could wrap people around, so there’s theories that there’s infinite amounts of universe, and there’s alternate universe, so it’s very important for me to get Hoover out because in an alternate universe, I am him. And I have to go and get him free because he was doing positive inside of Chicago, just like how I’m moving back to Chicago and it’s not just about, you know, getting on stage and being an entertainer, and having a monolithic voice that’s forced to be a specific party.

You know, people expect that if you’re black you have to be Democrat. I have conversations that basically said that welfare is the reason why a lot of black people end up being Democrat they say – you know first of all, it’s a limit to amount of jobs, so the fathers lose the job and they say, ‘We’ll give you more money for having more kids in your home.’ And then we got rid of the mental health institutes in the 80s and the 90s and the prison rates just shot up. And now you have Chiraq, what people call Chiraq, which actually, our murder rate is going down by 20 per cent every year. I just talked to the superintendent, met with Michael Sacks, that’s Ron’s right hand man. So, I think it’s the bravery that helps you beat this game called life. You know they tried to scare me to not wear this hat, my own friends, but this hat, it gives me power in a way.

You know, my dad and my mom separated, so I didn’t have a lot of male energy in my home. And also I’m married now into a family that, you know, not a lot of male energy going on, it’s beautiful though. But there’s times where, you know, it’s something about, I love Hillary, I love everyone, right, but the campaign “I’m With Her” just didn’t make me feel as a guy that didn’t get to see my dad all the time, like a guy that could play catch with his son. It was something about when I put this hat on, it made me feel like Superman. You made us Superman, that’s my favorite superhero, and you made a Superman cape for me.

Also as a guy that looks up to you, looks up to Ralph Lauren, looks up to American industry guys. Non-political, no bullshit [looks at media members] – put the beep on it, however you want to do it, five seconds delay – and just goes in and gets it done. Right now, you gave me the heart to go to Adidas. When I went in, in 2015, we were a $14 billion company losing $2 billion a year. Now, we have $38 billion market cap. It’s called “The Yeezy Effect.” And went and I said, “You have to bring manufacturing on-shore. Not even on-shore, into the core. It’s not about the borders. The core of Adidas, and Chicago, is the core of middle America, and we have to make middle America strong.

So, I had the balls, because I have enough balls to put on this hat. I mean, this Adidas thing made me a billionaire. And I could have lost $200 million walking away from that deal. But even with that, I knew it was more important for me to take the chance of walking away from that deal, than to have no fathers in Chicago, with no homes. And when we do have prison reformation, not rehabilitation, because they didn’t have the abilities in the first place. We never had anyone who taught us, they didn’t teach us. Then any specific deal, anything, that we bring jobs into America. And that we provide a transition with mental health and the AmeriCan education curriculum that Jim has worked on. Larry Hoover also has a curriculum that he’s worked on. We have Montessori curriculums that we worked on. WeWorks has beautiful curriculum. The Waldorf establishment has a curriculum. We have meditation.

There’s a lot of things affecting our mental health that makes us do crazy things, that puts us back into that trap door that’s called the 13th Amendment. I did say, “abolish,” with the hat on, because why would you keep something around that’s a trap door. If you building a floor, the constitution is the base of our industry, of our country, of our company. Would you build a trap door that if you mess up and accidentally something happens, you fall and you end up next to the Uni-bomber, you gotta remove all that trapdoor out of the relationship. The four gentleman that wrote the 13th Amendment, and I think the way the universe works is perfect, we don’t have 13 floors, do we? You know, the four gentleman that wrote the 13th amendment didn’t look like the people they were amending. Also, at that point, it was illegal for blacks to read, or African Americans, to read. So, that meant if you actually read the Amendment, you’d get locked up! And turned into a slave. Again, so what I think is, we don’t need sentences, we need pardons. We need to talk to people.

I was diagnosed with bipolar disorder. I was connected with a neuropsychologist that works with the athletes in the NBA and NFL. He looked at my brain, it’s equal on three parts. I’m gonna go ahead, drop some bombs for you. 98 percentile IQ test, I had a 75 percentile of all human beings when it was counting eight numbers backwards, so I’m gonna work on that one. The other ones, 98 percent, Tesla, Freud. So, he said that I actually wasn’t bipolar, I had sleep deprivation, which could cause dementia 10-20 years from now, where I wouldn’t even remember my sons name. So, all this power that I’ve got, and I’m taking my son to the Sox game and all that, I wouldn’t be able to remember his name, from a misdiagnosis. What we need is, we can empower the pharmaceuticals and make more money. That’s one thing, I’ve never stepped into a situation where I didn’t make people more money. So, we can empower pharmaceuticals, we can empower our industries, we can empower our factories, we can bring, not only Adidas on shore, we could bring Foxconn and set up a factory in, I think, Minnesota [corrected by Trump that it’s Wisconsin].

Yeah, Wisconsin. They have 4,000 jobs, people making 53,000 a year. And one of the things we gotta set is, Ford to have the highest designs. The dopest cars. The most amazing. I don’t really say, “dope,” I don’t say negative words and try to flip ‘em. We just say positive, lovely, divine, universal words. So, the flyest, freshest, most amazing car. And what we start with, is – I brought a GIF with me right here. [Scrolls through iPhone to show Trump.] This right here is the iPlane 1. It’s a hydrogen powered airplane, and this is what our president should be flying in. We’re gonna have Apple, an American company, work on this plane.

What I need Saturday Night Live to improve on, or what I need the liberals to improve on is, if he don’t look good [pointing to Trump], we don’t look good. This is our President. He has to be the freshest, the flyest, the flyest planes, the best factories. And we have to make our core be empowered. We have to bring jobs into America, because our best export is entertainment and ideas. But when we make everything in China and not America, then we’re cheating on our country, and we’re putting people in positions to have to do illegal things to end up in the cheapest factory every, the prison system.